with PayPal - just send her a message! 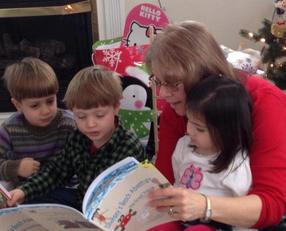 BEHIND THE SCENES:  Rhonda Paglia, also known as Grammy Pags, is a retired elementary teacher and very busy grandmother from Hermitage, Pennsylvania.  She loves writing stories for her five grandchildren and now she's happy to share them with other kids.  The Little Lambs and the Very Special Mission came to Rhonda during her prayers for the children and teachers of the Sandy Hook tragedy.  She donates all the profits from the this book to the "Angels in Charge" Scholarship Award.  The award goes to kids from Newtown who are planning a career in education.  Doonsey's Beach Adventure was a fun little story about a sweet crab who loves to explore.  The story was inspired by a trip to Kure Beach, NC. Three Little Gnomes and a Boy Named Orion was originally written for her grandson, Orion, in 2009.  Grammy Pags, updated the story after spending a lot of time in her gardens and noticing that there are secret things going on out there when she's not looking!  Duke 'n' Matt, Rescue Road Warriors is her first non-fiction, true-life story. "There are over 900 Rescue Road Warriors!" says Grammy Pags.  "Duke and Matt are a team, and part of this amazing group, who have rescued over 8,000 dogs and other pets."  The "Meeda and Me" series has been so much fun to write and illustrate!  There will be at least 3 more books in this series!  Finally, for now, "Grammy's Rockin' Color Rap-a-licious Rap ~ Teaching Kids Colors" was inspired by a little boy with autism.  He was having trouble learning his colors!  I had so much fun working with illustrator, Nicole Hassel Resele on this project!